skip to main | skip to sidebar

Tomorrow, we celebrate May Day in Tahrir Square. It’ll be probably the first real celebration of that event since 1951.

The July 1952 coup which brought Nasser to power had inaugurated its rule with the execution of two communist workers in Kafr el-Dawwar textile mill, Khamis and el-Baqri. May Days under Nasser, Sadat and Mubarak were nothing but hallow celebrations, where the president was expected to make a “surprise gift” to the workers, decreeing some bonus or raise, in a closed conference room with the stooges of the state backed Egyptian Federation of Trade Unions (EFTU).

I remember every May Day, when I used to watch with endless boredom Mubarak’s speeches, interrupted by the cheers of the EFTU hypocrite officials praising him. I’d flip the channels and watch with envy workers and activists in other countries marching freely in the streets, while all our attempts, as activists over the past years to hold any celebrations in the streets were always met with the iron fist of the security forces. As labor organizers, we would be content if we could pull together a conference in some closed hall inside one of the offices of the NGOs or political parties. 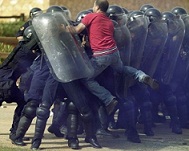